One of the things about running a game set in the real world, even a slightly alternate version as with Witch Hunter, sometimes you have to trip over something to realize it’s there.

Last week, in the run up to the kickstarter for The Thin Blue Line: A Detroit Police Story, Jason Marker, the writer/publisher, posted a scenario/encounter based around the haunting of the salt mines beneath Detroit.

Now first, holy crap Detroit used to be a salt mine?  Who knew?!

Ok, put your hands down, jackasses.  Doesn’t matter, salt mines beneath a city that won’t exist for a couple centuries doesn’t really help me with my Witch Hunter game.  But hey!  Salt people!  Creepy dehydrating mummies!  I can work with that.  I just need a different location.

So, one google search later and PRESTO!  Ladies and gentlemen, I give you…the Wiedliczka Salt Mines of Southern Poland. 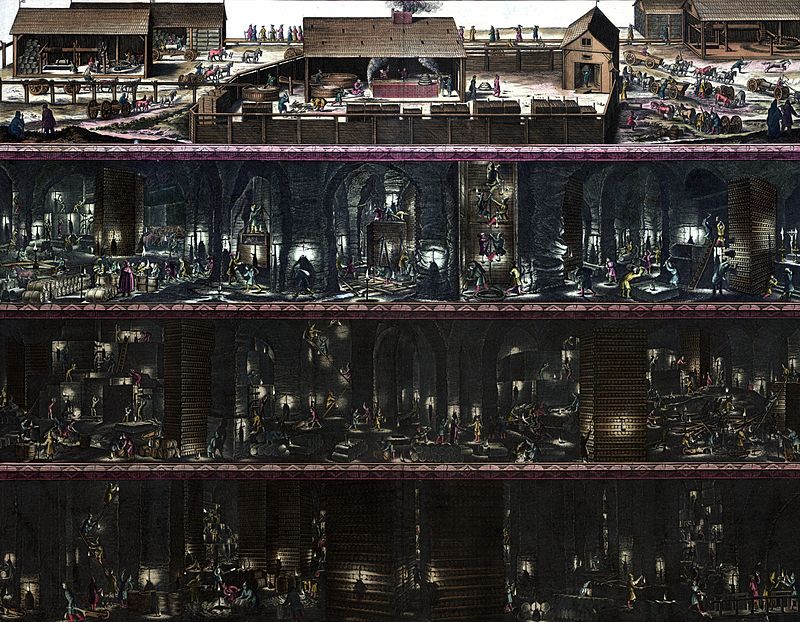 You want some details?  Of course you do!

But there’s MORE.  A legend and lost treasure built in:

[Princess Kinga] was about to be married to Boleslaw V the Chaste, the Prince of Krakow. As part of her dowry, she asked her father for a lump of salt, since salt was prizeworthy in Poland. Her father, King Bela, took her to a salt mine in Máramaros. She threw her engagement ring from Bolesław in one of the shafts before leaving for Poland. On arriving in Kraków, she asked the miners to dig a deep pit until they come upon a rock. The people found a lump of salt in there and when they split it in two, discovered the princess’s ring. Kinga had thus become the patron saint of salt miners in and around the Polish capital.

Now if this were your bog standard fantasy world, sure you’d probably cook this up in an afternoon.  But this is the real deal!  You can still visit the place!  You can buy souvenirs at the gift shop!  No comment if it is still the bulwark of the Polish economy, though that answer may lie in a joke book from the 70’s.  So yeah, this is a prime example of tripping over something you never knew existed, and would never have even imagined existing if you hadn’t gone looking for it.

As it is, you can find a handy list of world salt mines on wikipedia. But few of these have the same gamer allure of Wiedliczka.

Now.  For those of you who have yawned through this history lesson, here are salt people for Witch Hunter!

Description: Salt People stand roughly as tall as a grown man, but have a crouched, hunchbacked posture that makes them appear much shorter. They have thin, twisted limbs, emaciated faces with sunken cheeks, a withered slit for a mouth, and sparkling silver eyes. Their bodies are covered in powdered salt, which they shed with every step, and their thick white skin is completely hairless. Whether salt people are actually the restless spirits of dead miners or some creature native to the mines is unknown.

Dramatics: These creatures move with a slow, shuffling gait most of the time, but are capable of intense bursts of speed over short distances. They can also burrow through the walls of the salt mine, and even through soil, allowing some of them to surface throughout the surrounding community.  When attacking, a Salt Person uses wild punches and powerful body blows to pummel its opponent. In addition to the damage caused by the physical assault, the creature’s touch absorbs the water in a target’s body, causing immediate, debilitating dehydration. Salt People rarely fight to the death, and on those rare occasions where one has been captured or killed, their bodies melt quickly into the Earth, leaving only a salty residue behind. They hate light and loud noises, and usually flee into the darkness or burrow into the sand rather than fight. When cornered, spooked, or if flight is otherwise not an option, a Salt Person attacks quickly and viciously, attempting to overwhelm or kill its target quickly so that it may flee.

Once again, thanks to Jason Marker for the original concept.

6 thoughts on “Tripping over History (or Salt Mummies Must Die!)”