In the remote mountains of Croatia, an archaeologist makes a strange discovery:  a subterranean Catholic chapel, hidden for centuries, holds the bones of a Neanderthal woman. In the same cavern system, elaborate primitive paintings tell the story of an immense battle between tribes of Neanderthals and monstrous shadowy figures. Who is this mysterious enemy depicted in these ancient drawings and what do the paintings mean?

Before any answers could be made, the investigative team is attacked, while at the same time, a bloody assault is made upon a primate research center outside of Atlanta. How are these events connected? Who is behind these attacks?  The search for the truth will take Commander Gray Pierce of Sigma Force 50,000 years into the past. As he and Sigma trace the evolution of human intelligence to its true source, they will be plunged into a cataclysmic battle for the future of humanity that stretches across the globe . . . and beyond.

With the fate of our future at stake, Sigma embarks on its most harrowing odyssey ever—a breathtaking quest that will take them from ancient tunnels in Ecuador that span the breadth of South America to a millennia-old necropolis holding the bones of our ancestors. Along the way, revelations involving the lost continent of Atlantis will reveal true mysteries tied to mankind’s first steps on the moon. In the end, Gray Pierce and his team will face to their greatest threat: an ancient evil, resurrected by modern genetic science, strong enough to bring about the end of man’s dominance on this planet. 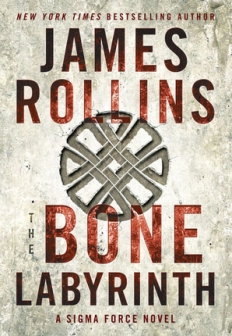 That’s the back cover blurb for James Rollins’ novel, The Bone Labyrinth. Part of his “Sigma Force” series, which sounds like a mix of Vince Flynn and Dan Brown. And DAMN if it doesn’t sound like the set up for a kick ass Witch Hunter campaign!

I haven’t read any of Rollins’ latest stuff.  But Amazonia and Excavation were great fun if you like pulp tales in the vein of Doc Savage or Indiana Jones.  Which is probably why Rollins got the nod to write the novelization for Indiana Jones and the Kingdom of the Crystal Skull.  It’s light, breezy stuff befitting of the genre.  Rollins isn’t at the top of my recommended reading list, but his stuff is consistent and fun and well worth a look if you are into pulp adventure.  I haven’t read any of his Sigma Force novels, but they have been on my radar.  Because, as with the Bone Labyrinth, the descriptions just scream Witch Hunter (or Rippers, for my fellow Savage World aficionados) adventures, though set against a modern backdrop.

I’m going to take the plunge though.  The Bone Labyrinth is sitting ready, just waiting for me to finish Patrick Rothfuss’ The Name of the Wind.  Once I’m done, I’ll report back.  If its as good a fit as I think it will be, I may even do a bit of adventure outlining here.

But what about you?  Any other James Rollins fans out there?  What Sigma Force books should I be looking at if I like The Bone Labyrinth?

2 thoughts on “If Adventure Has a Name…”